Dear John,
Many thanks for attaching the Boylston article.


Conclusions
There are two unequivocal accounts of inoculation in the middle of the 16th century, one Chinese and one Indian, and each gives a specific place and name to the initial inoculators. Whether it was in use before about 1550 is entirely speculative.


The account of Coult isn't "unequivocal" I'm afraid.  Coult says that he has been told that inoculation has been known in Bengal for 150 years, "as near as I can learn."  This is vague.

Then he says that Brahmana records give the first Indian inoculator as "Dununtary."  This is a version of the Sanskrit name that is scientifically transliterated as "Dhanvantari" or in Devanagari as "धन्वन्तरि".  This is the name of a mythological progenitor of the science of medicine.  This assertion is equivalent to claiming, say, that Aesclepius did inoculation.  It cannot be taken at face value as historical evidence, and should be treated as an appeal to a mythological past age by someone who assumed that the ancient sages knew all of medical science.

Coult, writing in Calcutta, placed Dununtary in Champanagar: "a physician of Champanager, a small town by the side of the Ganges about half way to Cossimbazar."  This can't be a place in Bihar.  It has to be somewhere north of Calcutta.  Cossimbazar is in the northern outskirts of modern Berhampur.  So we're looking for a place that used to be called Champanagar, and is somewhere round about Ranaghat, Santipur, Nabadwip or Plassey (as in, "battle of").  Wherever this Champanagar is, if it's between Calcutta and Cossimbazar, it's in Bengal.

The trouble is, Campanagar (Campā, Campānagara, Campāpura, etc) is normally a reference to the well-known place in Bihar, as Boylston assumes.  I think it's most likely that Coult is wrong about something.  Either he's wrong about the name "Champanagar" or he's wrong in locating it between Calcutta and Cossimbazar.   But the whole thing's moot, really, since Dhanvantari is a mythical character.

With Robert Coult, in 1731, we apparently have a real witness, and a fairly early one.  But before relying on Coult's report, which we get through Dharampal, I would feel more comfortable having eyes-on confirmation of the Coult document.  Years ago, I tried to follow Dharampal's references to the Coult document,

but I drew a blank.  Dharampal says, "It is on ff.271v-272r in Add Ms. 4432 amongst the Royal Society papers in the British Museum."  Now, things are easier because of the internet and the BL's cataloguing.  This reference takes us to item 44 in Add MS 4432.  Could someone who lives in Bloomsbury go and look at the Coult document and get confirmation of it's content?  It's important, since it is our earliest dated account of inoculation in India.  Dharampal was a good scholar, but it would be good to see the original document.

Ralph W. Nicholas's book Fruits of Worship: Practical Religion in Bengal, (2003), pp. 172-177, gives a good survey of the early sources, and refers to the European accounts from the 18th century onwards, Coult's (again from Dharampal), Hollwell's, and others.

I would not say that we have historical evidence for inoculation in India before Coult, i.e., early 18th century.

I have a dim memory from the time I was writing "Pious Fraud" that there was some evidence that sounded worth investigating in early VOC accounts in Dutch.  But I was not able to follow that up at the time.

I've addressed this to you directly; please circulate it as you see fit.

Posted by Dominik Wujastyk at 8:41 am No comments:

In my 1987 paper, "A Pious Fraud: The Indian Claims for pre-Jennerian Smallpox Vaccination"  I traced all claims for pre-Jennerian smallpox vaccination to a single newspaper report that appeared in the Madras Courier for 12 January 1819.  I have now uploaded scans of this issue of the Madras Courier to archive.org: for posterity. The images at archive.org are large enough to read properly.

The above image is too small to read, but you can read this one from archive.org.
Posted by Dominik Wujastyk at 10:40 am No comments: 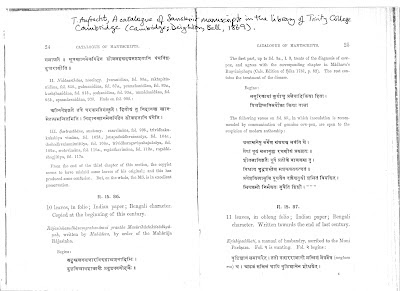 MS R.15.86 in the library of Trinity College Cambridge is a tract in Sanskrit in the Bengali script about smallpox.  To the right is the description of this MS in Aufrecht's 1869 catalogue of the Trinity collection (click to enlarge).
The work is described as Rājasiṃhasudhāsaṃgrahanāmni granthe Masūrikācikitsādhyāyaḥ, meaning "The chapter on therapies for smallpox in the book called The Collection of Nectar of Rajasinha."  Aufrecht says it's by a Mahādeva.  It's hard to know who either Mahādeva or Rājasiṃha might be.  A work called Siṃhasudhānidhi "Collected Nectar of the Lion" was composed by one Prince Devīsiṃha of the Bundela dynasty in the 17 century (Meulenbeld, History of Indian Medical Literature, v. IIA, p. 299), but that's a long shot.  Rājasiṃha is a bit of a generic name, "King-Lion".  All Sikhs have "siṃha" (=Singh) as part of their names.  Could be anyone, really.  The MS collection comes from John Bentley (d.1824), who was a historian of astronomy in early 19 cent Calcutta (he wrote A historical view of the Hindu astronomy (1825)).  The MS has written on it in a copper-plate script on the last leaf, "The Forgery of the Hindu respecting the Cowpock-innoculation."  Probably Bentley's hand, though I'm not certain.  The verses on p.25 that Aufrecht says "are open to the suspicion of modern authorship" say,

There are plukes (grantha, knot, lump) on the breasts of cows, with discharge.
One should collect the pus from them, and protect it carefully.
Preceded by the illnesses of Śītalā, having placed on the surface (pratīka?) of a child,
with a small knife a wound like the wound of a mosquito,
having made it enter into the blood, with the pus itself,
and with the bloods on a little brush, the wise person to what is cured.
The very best physician fearlessly approaches (m-? upaiti) on the child _ _ _

My translation is a bit incoherent, because the original is too.  Maybe if I thought about it longer, I might come up with something better, but probably not.  The vocabulary is a bit strange: pratīka for a limb or the surface of the body is unusual; the stuff about a brush may be wrong. Any suggestions gratefully received.
Posted by Dominik Wujastyk at 9:33 am No comments: