Xindy is an index-processor for use with TeX and LaTeX.  It is a successor to Makeindex, and is the standard system for formatting and sorting indexes and glossaries that go with LaTeX documents.

The main distribution of Xindy is included in TeXlive and is downloadable at CTAN.  At the time of writing (July 2016), this is version 2.5.1 (2014).  The source code used to be maintained at Sourceforge (Xindy at sourceforge, currently version 2.3 from 2008), but a later version is now available at Github (Xindy at Github).  Since Github has version 2.5.0, source development and compilation for TeXlive must be going on somewhere else, but I don't know where.   The best place to fetch Xindy if you want to tinker with it is from the CTAN base directory.

The development of Xindy is uneven, given the various repositories with different versions.  The documentation is also of limited use to beginners, being technical and out of date (the examples in the tutorial do not work with the current software release).   Nevertheless, it is a very flexible and powerful program, and does a great job when it works.  And for many texts and nearly fifty modern languages, it "just works," which is great.

In LaTeX documents, the packages index, makeidx or imakeidx will normally be used to provide the macros needed for indexes.  Xindy does the rest.

For my writing, I normally use XeTeX with LaTeX and I write using Unicode UTF8 encoding and the IAST transliteration scheme when doing Sanskrit in Roman script.  (For Devanagari I use normal Unicode encoding.)

Xindy by itself doesn't recognize the IAST accented characters like vowels with a macron or consonants with under-dot.  I found that setting Xindy's language to "general" did a pretty good job of nearly all the characters, but not all.  I got words with ā-, ṛ- etc. at the beginning of the index, before "A."

The program for creating a new "alphabet" for Xindy is in Perl and is called make-rules.  I couldn't initially find it at all, because it isn't at the Sourceforge or GitHub repositories (or I couldn't find it).  Later, I found it at CTAN, and I wish I'd seen that earlier.

Finally, I could not get make-rules to work.  The documentation and tutorials simply didn't provide me with enough accurate information to start, as a beginner, and get a workable result from make-rules.

I therefore made up a very simple Xindy style file, IAST.xdy, with the following content:
This last point is a Knuthian white lie (TeXbook, vii).  I currently use TeXStudio for actual writing, so the above "command line" is entered into TeXStudio's "options/configure/commands" menu and invoked with a convenient function-key shortcut.


I'm now getting results that look like this, which is what I was after: 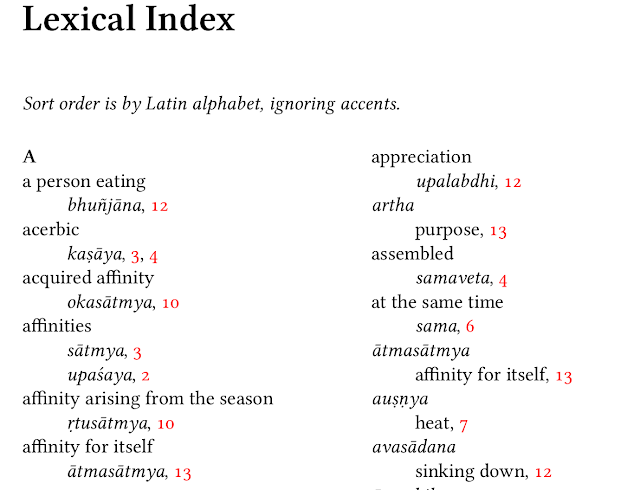 I'm sure that all this could be done more elegantly and completely.  In the longer run, I hope a successor to IAST.xdy might take its place alongside all the other languages formally supported by Xindy.
While working on this, I sent cries for help to the Xindy discussion list.  Zdenek Wagner replied, and shared with me work he has done towards indexing Hindi and Marathi in Devanagari script.


Posted by Dominik Wujastyk at 3:38 am No comments: