I care deeply about good writing, which I believe to be indistinguishable from good thinking.  As an undergraduate, I was lucky enough to get and read two texts that turned into life-long influences:
As a student, I internalized Orwell's six rules:
My professor, Richard Gombrich, also cares about good writing, and impressed that belief upon us students.  Some of his remarks on this topic appear in his lecture "On Being Sanskritic" (p.27).  For example, his ringing indictment,


The so-called `literal translation' -- an intellectual fallacy and an aesthetic monstrosity -- is still widespread;

As a result of my interest in the forms and sins of self-expression, I have developed a kind of radar, pinging for materials that support this interest and take it further.  The Economist Style Guide is one such resource that showed up on the screen long ago.

Today, I was reading the WikiPedia article about Timothy Leary, and I saw that an unsubstantiated claim ("Others have said") was tagged as a "weasel word".  I didn't know this expression.

Weasel words are described under "unsupported attributions" and are amongst several strategies that I see regrettably often in academic prose.  As WikiPedia says: 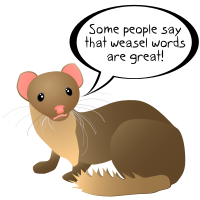 Weasel words are words and phrases aimed at creating an impression that something specific and meaningful has been said, when in fact only a vague or ambiguous claim has been communicated. A common form of weasel wording is through vague attribution, where a statement is dressed with authority, yet has no substantial basis. Phrases such as those above present the appearance of support for statements but can deny the reader the opportunity to assess the source of the viewpoint.

Another major technique for avoiding attribution is to use the passive grammatical voice.  To the WikiPedia "weasel words" examples, I could add (and probably will) a category of what might be called "cooercives," words and phrases designed to prevent the reader from thinking too much, by suggesting that thinking isn't going to be worthwhile in this particular case.  Thus, "clearly," "of course," "naturally," "it goes without saying." (Several of these are referenced in WikiPedia's "Editorializing" section, see below.)

Following the WP link, I stumbled into a wonderful collection of notes about how to write better and avoid writing (and thinking) badly.  "Words to Watch" has the following headings (mid-2014):
WikiPedia's Manual of Style is excellent, as a whole.  But this section "Words to Watch" is a treasure chest.
Posted by Dominik Wujastyk at 4:04 am No comments: