On the use of parentheses in translation

This deserves a fuller discussion; I'm just doing a quick note here, arising out of a conversation with Dagmar and Jason Birch.;

My thinking is influenced by my teachers Gombrich and Matilal, both of whom had a lot to say about translation, and by reading materials on translation by Lawrence Venuti and Umberto Eco (Mouse or Rat?).  There's a huge literature on translation, including specific materials on Skt like Garzilli, E. (Ed.) Translating, Translations, Translators from India to the West.  Cambridge, MA, Harvard Univ., 1996.

I wonder about the heavy use of parentheses by Indologists.  One does not see this in English translations from French, say, or German.  Or even Latin or Greek.  What are we up to?  I can distinguish several reasons for parentheses in English trs. from Skt. 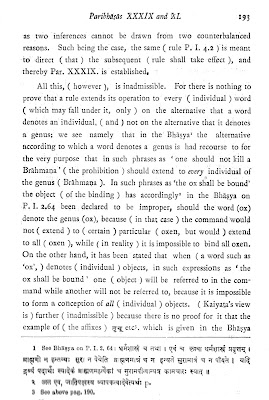 The Kielhorn exemplifies another major problem, that Matilal used to talk about passionately.  If you read Kielhorn's tr. leaving out the parentheses, it's gobbledegook. Matilal said that if one has to use parentheses, then the text not in parentheses should read as a semantically coherent narrative.  This is because the Sanskrit is a semantically coherent narrative.  To present an incoherent English text is a tacit assertion that the Sanskrit is incoherent.  In which case, we should see parentheses in Sanskrit too.  Sometimes we do, as in Panini's mechanism of anuvṛtti, when parts of previous sutras are tacitly read into subsequent ones.  Anuvṛtti is doing similar work to that done by parentheses.  So Vasu's translation of Panini uses parentheses in a valid way, I would argue.
What are valid reasons for parentheses?  I would say that very, very rarely it is justified to put a Skt word in brackets when not to do so would be seriously confusing or misleading for the typical reader, or when the Skt author is making a tacit point.  "He incurred a demerit (karma) by failing to do the ritual (karma)."   Or, in the RV, "The lord (asura) of settlements has readied for me two oxen ."(Scharfe 2016: 48).

Then there's the psychology of reading. For me, this is one of the important reasons for not using parentheses or asides of any kind.  I've never articulated this before, so what follows may be a bit incoherent.​  When I watch my mind during reading, I absorb sentences and they create a sense of understanding.  It's quite fast, and it's a flow.  As I go along, the combination of this flow of sentences and the accumulation of a page or two of it in memory produces the effect of having a new meaning in my mind, of having understood a semantic journey shared with me by the author.  But when there are many parentheses, that flow is broken.  The reading becomes much slower, and I often have to read things several times, including a once-over skipping the parentheses.  This slow, assembly-style reading is not impossible, and one may gain something.  But one loses a lot.  What's lost is the larger-scale comprehension, and the sense of a flow of ideas.
What I find works for me as a reader and writer is to avoid the branching of the flow of attention while reading.  Branching is often done through parenthetical statements, -- and through dashed asides -- (and through discursive footnotes), but not citation footnotes.  In my mind, it's like travelling in a car and taking every side road, driving down it for two hundred metres and then coming back to the main road, and continuing just until the next side road, etc.  As a writer, I find it quite easy to avoid branching.  I do it by thinking in advance about the things I want to say, and then working out a sequence in which I want to present them so that the reader gets the sense of connection.  Cut-n-paste is very helpful.
I'm not sure whether the above is totally personal to me, or a widely-shared phenomenon.  I've never read anything about this topic.  I have read about eye-movements during reading, and the relationship of this to line-length and typeface design.  I should look around for material on the psychology of comprehension during reading.  There must be something out there.


I sound out every line I write, imagining the reader reading it, and never imagining as the reader certain scholars, who shall remain nameless, who might be watching with an eagle eye, poised to pounce on any mistake I might make; no, I always imagine the reader as my father, on my side. I try to be that person to my students, who are otherwise vulnerable to an imaginaire of hostile reception that can block their writing, as it keeps some of my most brilliant colleagues from publishing. My father saved me from that.
-- Scroll.in "A Life of Learning"

Posted by Dominik Wujastyk at 4:47 pm 2 comments: Links to this post